This month I had the very rare occasion of having some free time so I wanted to get a few consecutive days of sailing done. How about a mini cruise?! October is typically a great sailing month here on the California coast but November is a bit iffy. As winter approaches, the weather alternates between dangerously large swell and glassy seas, with not too many days in the middle.

Still, I had free time now so best to take advantage of it. On the first week the weather was not good, with swells in the 10-15 ft range and winds gusting to 35 knots. The second week looked good though. Too calm for sailing, but that’s how it goes in the fall here.

My plan was to head north from Santa Cruz to San Francisco and then decide based on weather. I had some hope of making it to Drake’s Bay but the weather forecast decided against that. On the day I would’ve been there, forecast predicted gusty winds from the east which didn’t sound very safe. The anchorage there is best in the usual N or NW winds. So instead, I went to Angel Island which is always nice.

Here are notes and photos from each day:

So 166 nautical miles in total. Unfortunately, most of that was motoring.

Here is some video of the trip: https://youtu.be/Ndyu3lYQSc8

All in all, despite all the motoring, a fun trip! This was the longest continuous cruise I’ve done so that was a nice experience. I was mostly self-sufficient on the boat during these six days. I didn’t plug in to shore power or fill water tanks at any point. I did buy 4.9 gallons of diesel in Half Moon Bay on day 5.

Of all the improvements I’ve made to the boat, the autopilot is the most significant. I never could have attempted a trip like this without it. Standing at the helm for six to ten hours a day would be too much to even consider. Now with the autopilot, I only had to steer a few minutes a day, in and out of the harbors/anchorages. 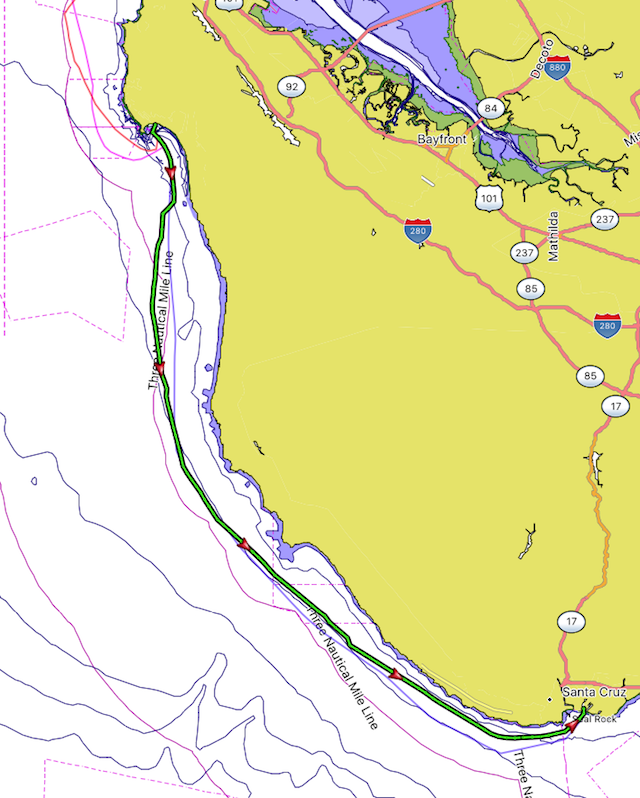 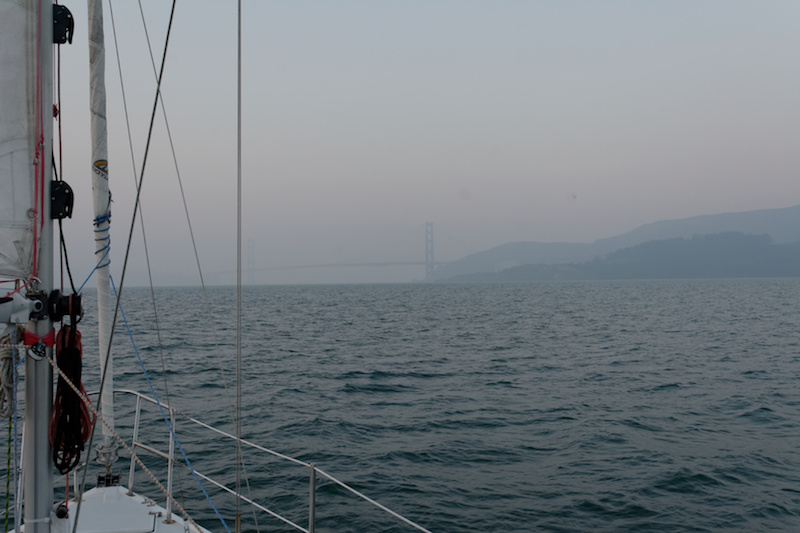 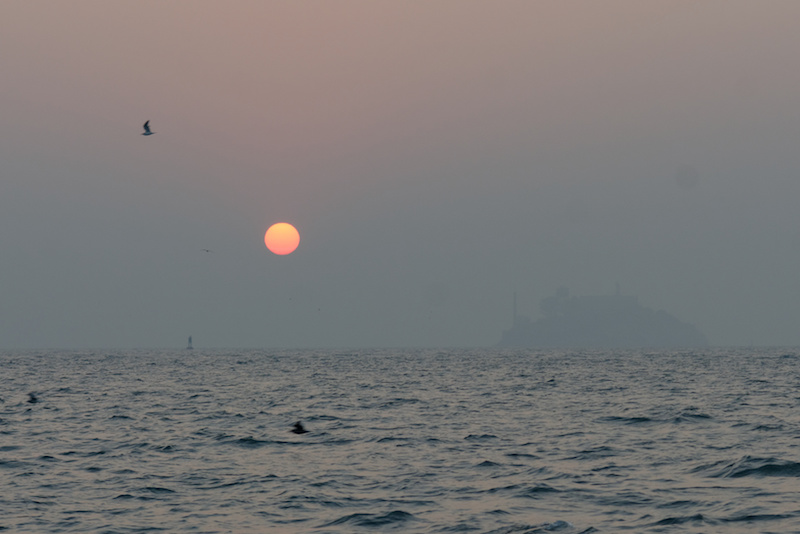 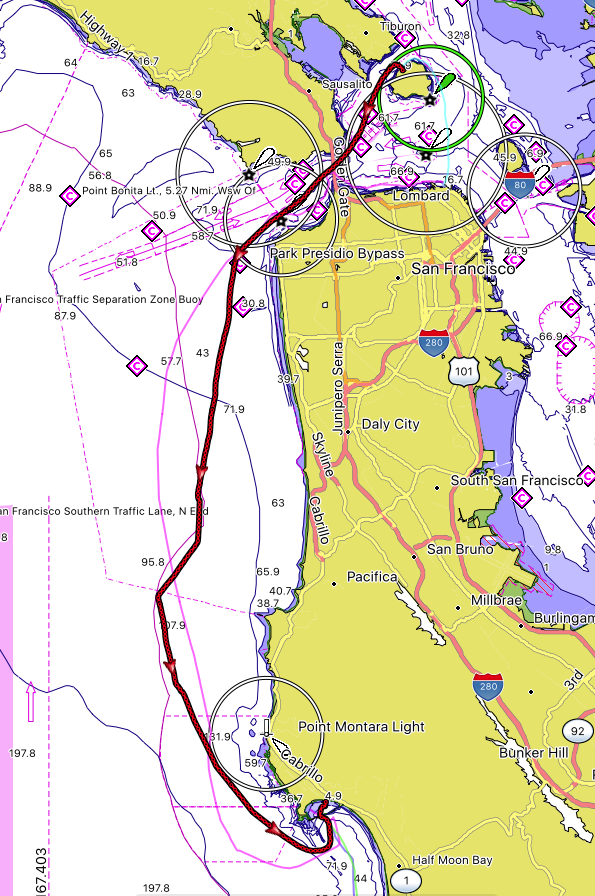 No sailing today. Staying a full day and another night at Angel Island.

This is the cruising life! Spent time in the morning just reading and taking in the nice views (although, still way too much smoke in the air). 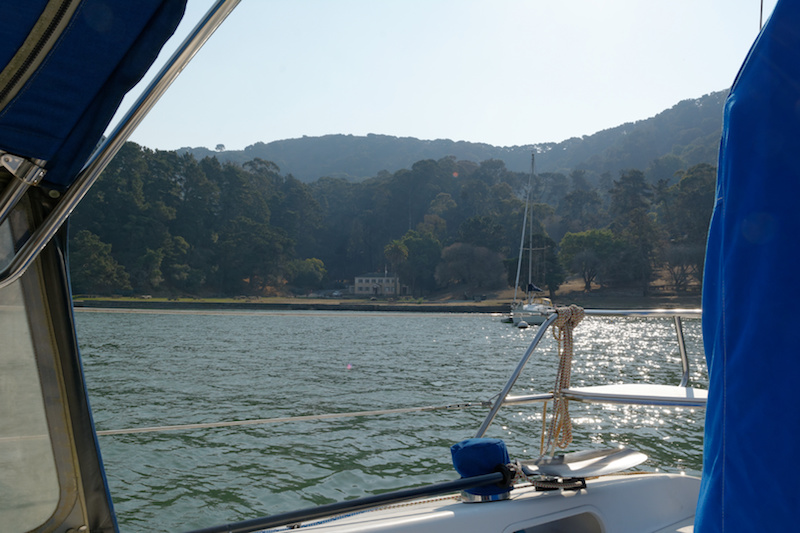 Then I kayaked over to the island and did some hiking and wandering. The cafe was open today (it was closed yesterday due to smoke, said a sign) so I had lunch there. 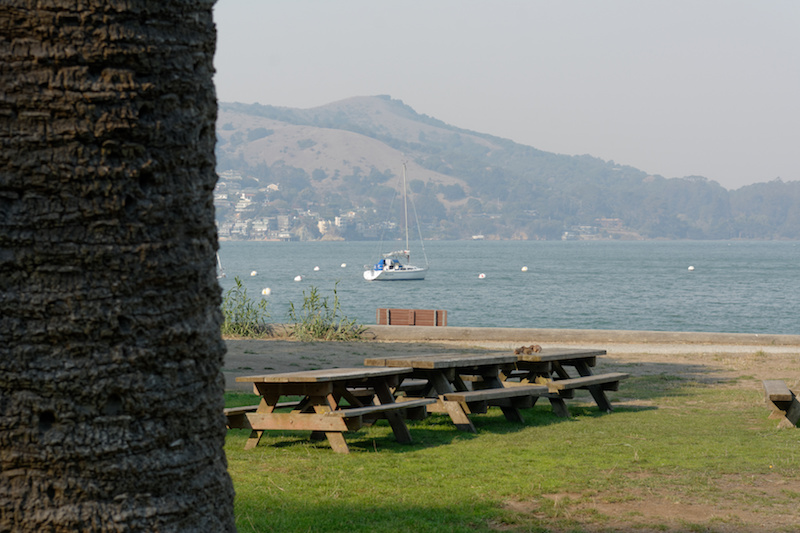 The raccoons at Angel Island have no fear of humans, they wander around the crowds of people, fun to watch.

Eventually I paddled back to the boat and did a bit of maintenance. I dug out my other anchor and hooked it up just in case it’s needed. I also noticed the top port cheekblock for the lazy jack has come loose. Can’t fix that here, it’ll have to wait until I climb the mast.

After sunset, a large group of pelicans (over a hundred, I’d say) had a feeding frenzy right in the cove between the boats. It was really fun to see them dive for fish over and over. It was almost dark so the photographs didn’t come out well, but here’s one: 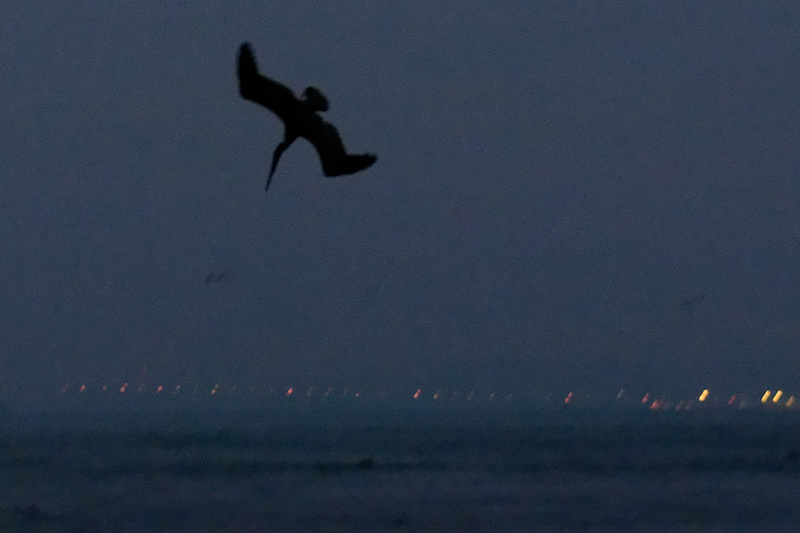 Next day I wanted to get an early start so then it was time to sleep early.

After two long days, today was just a short hop over to Angel Island.

Thus, I didn’t have to get up before sunrise and I even had time for a warm breakfast on Pier 39.

The day was windy and choppy, typical San Francisco summer weather, although it is November. So got a little bit of sailing in and then it was time to turn into Ayala cove.

It was the first time I had to pick up the mooring balls (fore and aft) singlehanded but it all went smoothly.

After settling in, I went to the island on an inflatable kayak, walked around for a bit and then paddled back to the boat.

Total for the day: 5.2 nautical miles. 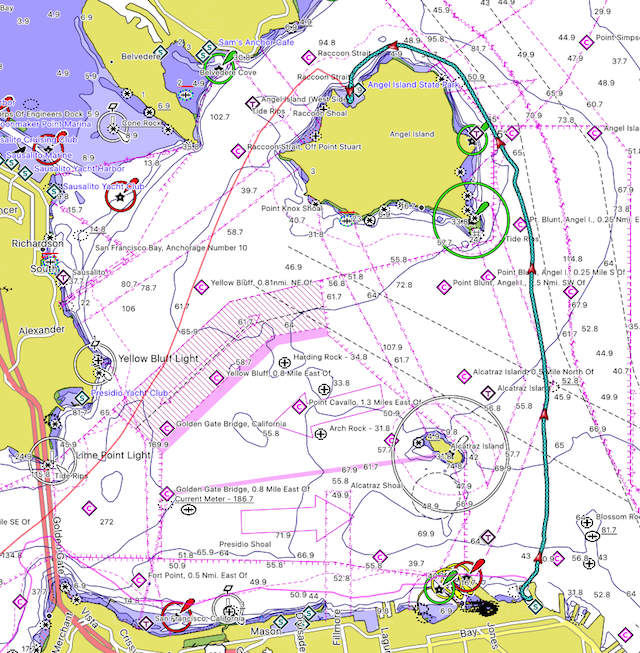 The second day started way earlier than I had hoped. I woke up at 12:30am to the sound of water slapping against the hull. And wind. That sounds like a lot of wind! Checking the instruments, 22 knots!

Will the anchor hold? To make matters worse, the wind had turned around making the beach north of the anchorage a lee shore.

I was up until 4am monitoring the situation. The wind kept blowing at 20-22 knots and also making large direction changes every few minutes. Not a fun night!

I had the anchor watch running on the primary chartplotter (which I can monitor on a tablet from the comfort of the aft cabin) and also on a handheld GPS as a backup. Fortunately the anchor never budged, the boat remained in a tight circle all night.

Around 4am the wind decreased to 12-15 knots and I finally was able to get a couple hours of sleep.

My plan for the day had been to leave at 7:30am in order to cross the Golden Gate bridge on a favorable tide. So I was up at 7am to prepare and hoist anchor.

Well.. long story short, looks like the anchor tangled itself with something very heavy. No wonder it never moved an inch even with the repeated 180 degree windshifts and 20+ knots. I spent three hours trying to raise it. Even had a rising tide to help. Eventually I had to concede defeat and abandon the anchor and chain on the bottom.

The rest of the trip, once I finally got moving, was uneventful. Heavy fog at sea and heavy smoke over land (from the wildfires) meant very little visibility in either direction. Flat seas and little to no wind meant nothing but motoring today.

Given the delay in the morning, instead of arriving at the Golden Gate at a moderate flood, I arrived at max ebb, -4.7 knots of current.

The current runs strongest in the deep water channel. However, the shallow area just south of the bridge often has a counter current so I tried to hide there on the approach. Instead of -4.7 knots just a few hundred feet to the left, I actually had 2+ knots of counter current to ride, resulting in 8 knots SOG towards the bridge! Nice.

Eventually, reaching the bridge, I had to get into the ebb at which point my speed over ground dropped from 8 to barely above 1. 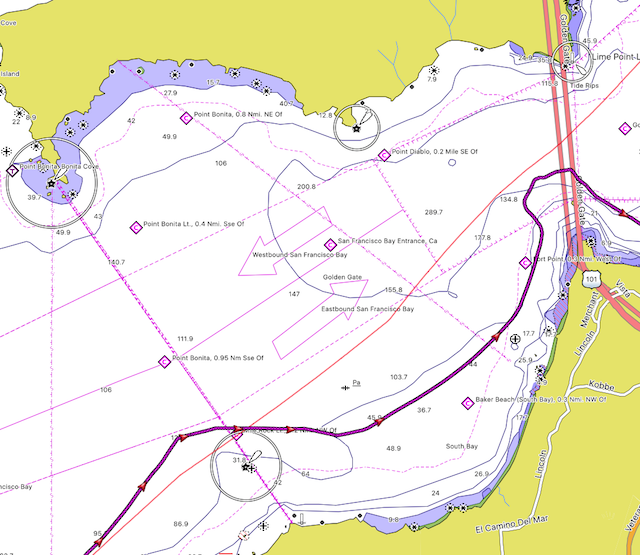 Once past the bridge, it was a short motor into Pier 39 where I stayed for the night. 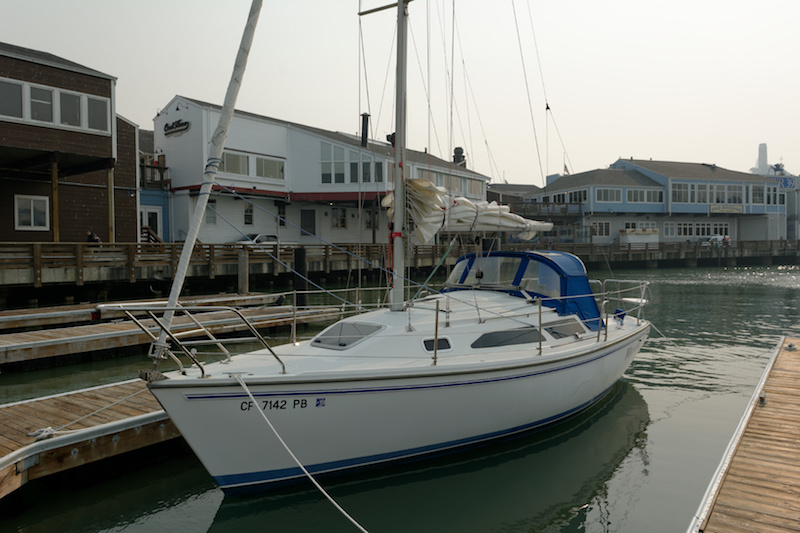 Total for the day: 32 nautical miles. 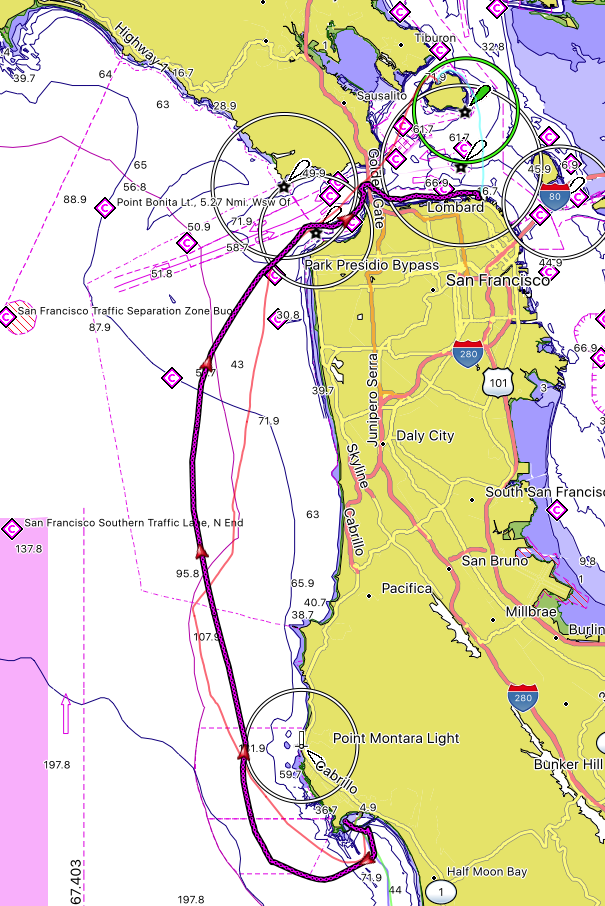 The first day was to be the longest and toughest. Heading north from Santa Cruz means the wind will (nearly always) be on the nose and the swell is against us. This is the typical “bash” of traveling north on the California coast.

The weather had been rough for many days prior to this (swells over 10 ft in the 9-10 second range). As winter approaches, the coastal weather here tends to be either glassy calm or boisterous to stormy.

Today the swell was down to a more reasonable level and the forecast over the next 5-7 days looked nice, so the weather window was open. Time to go!

Being November, the days are short, so I wanted to start as early as possible. I left about an hour before sunrise for the long motor-sail to Half Moon Bay.

Had a little bit of everything in terms of conditions on this first day. Long calm stretches, sometimes windy sometimes not. Also an hour or so of a very wet ride in the bumpier swell. 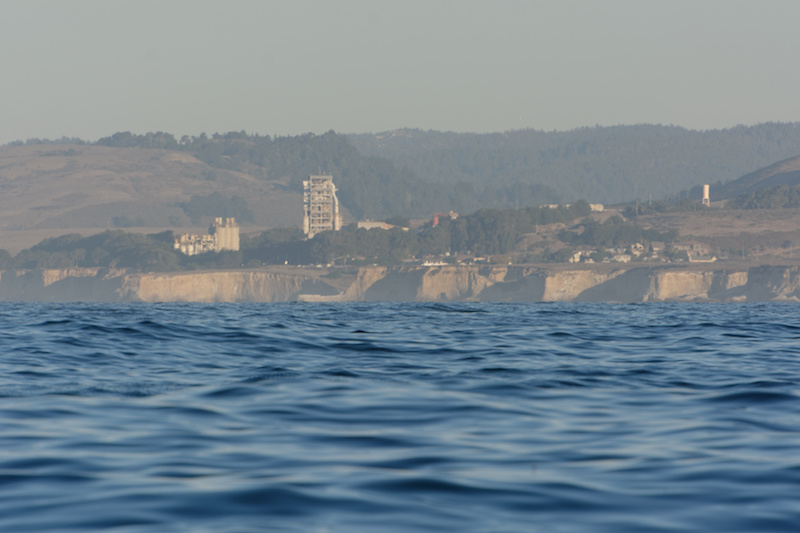 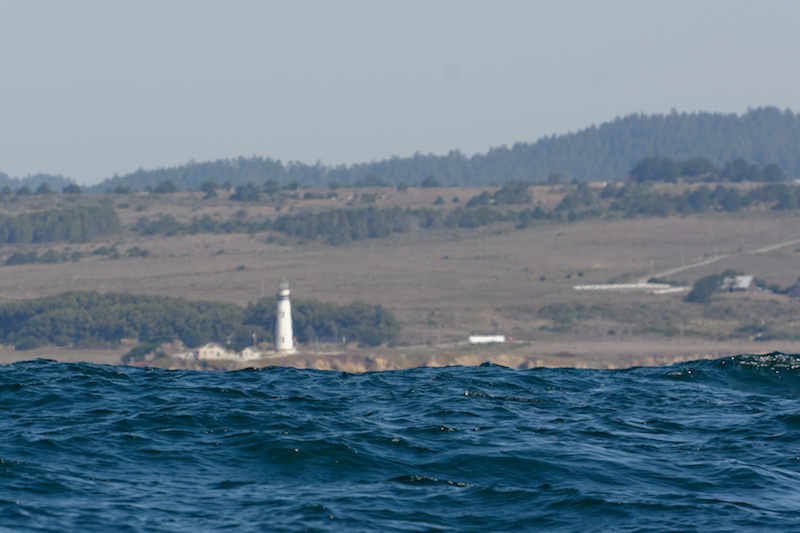 Approaching Half Moon Bay (really, Pillar Point) harbor I called to ask about guest slip availability. Unfortunately, none available! Fortunately there is a large anchorage between the inner and outer breakwaters so that’s where I went for the night.

By 4:30pm I was anchored in the outer harbor. It was very calm inside the harbor but I’m always a bit wary of sleeping while anchored so I let out 100 feet of chain in 12 feet of water.

Due to the large wildfires in California this week, the air was filled with smoke, leading to dramatic sunsets: 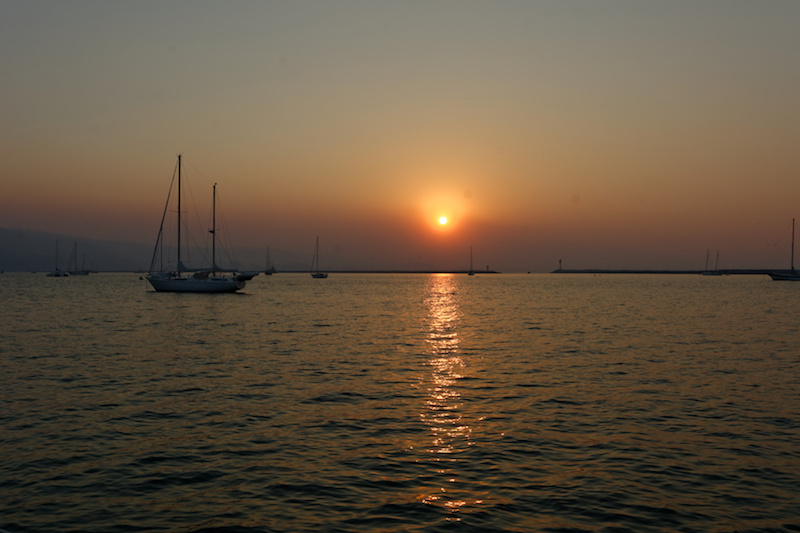 Total for the day was 49 nautical miles. 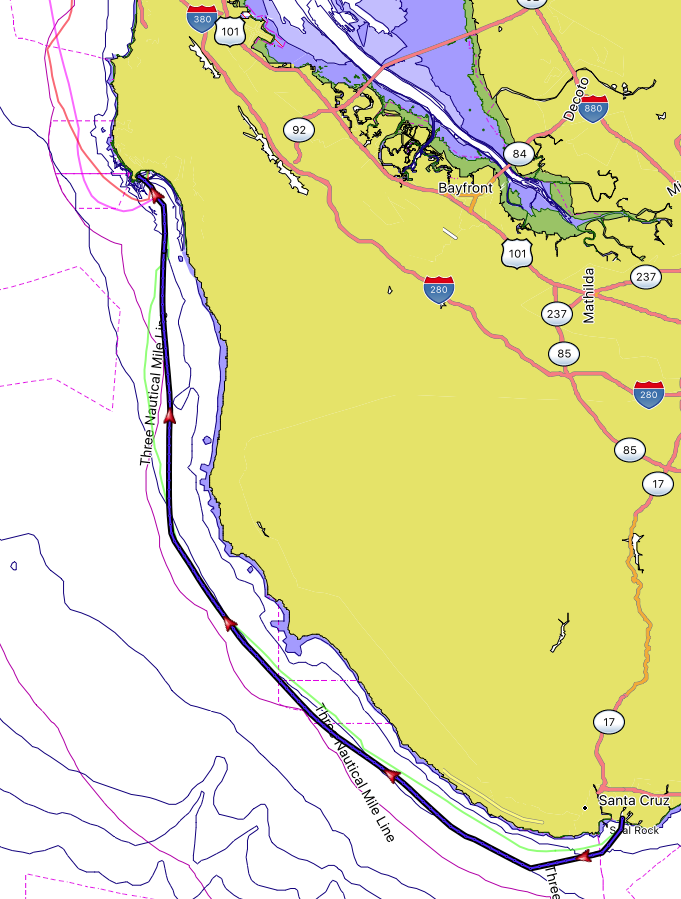